Look everyone, I got a package in the mail too! Galaxy foods contacted me about taste testing some of their products and of course I jumped on the chance. I know a quite a few of you are enjoying a similar package. Thank you, Stacey! Not pictured is the pepper jack, which happens to be Brandie's favorite. She is no longer able to find it around here so I gave it to here and told her she had to do a review on her blog. "Mom, my review is that I love it" 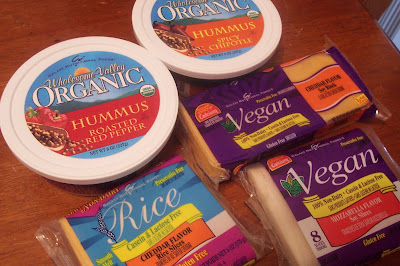 A rushed night, which gave us a quick meal of cheddar mashed potatoes, sauteed green beans and spinach with garlic and olive oil, and apricots. I grated some of the cheddar block cheese onto the potatoes. As you can see it didn't melt right away, but after giving it a mix into the hot spuds it melted great. I have not had cheese in a very, very, long time, but this stuff is great! I took the same thing to work the next day for breakfast. Who said I had to eat a "typical" breakfast. :o) 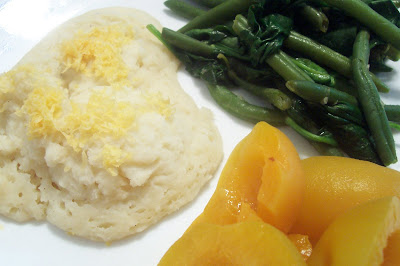 Next I made some of Vegan Dad's broccoli soup. With the addition of some more shredded cheddar block cheese we had broccoli cheddar, which was fantastic. 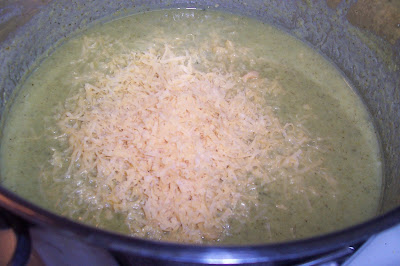 Here is the finished product. DH who will not eat cooked broccoli (throw it in a salad he says) loved this soup. It had to be the cheese. I was thrilled beyond words. That gives the vegan block cheddar cheese a 5 star rating! ***** 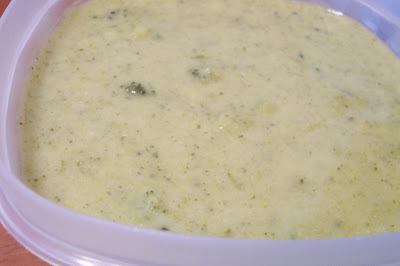 As you can see in the picture above I also received mozzarella flavored sliced cheese. Of course that meant Italian of some kind. Pizza seemed to be quick, easy, and it also gave me a chance to use some more of the "new kid on the block" steamed sausages. I used Vegan Dad's recipe again, which I have posted about before. For those of you who have yet to try them, you really must. The crust recipe is from Vegan Lunch Box and it is really good. It is a multi-grain crust. Here are the little darlings just out of the oven. As you can see this cheese did not melt, but the flavor is spot on for us. My mom stopped by and also gave the cheese and the pizza a thumbs up! 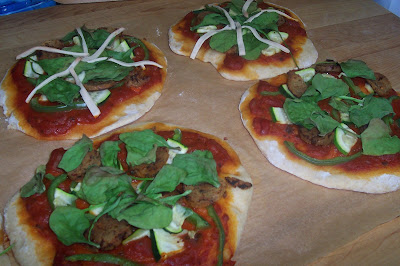 Ok, everyone needs to go check our Rural Vegans site. She made some awesome stuffed shells and listed the recipe. Take note, I quartered the recipe because I was short on tofu and it still made a dozen stuffed shells. I used melody's simple marinara sauce that I have tested for her. I also put the mozzarella cheese on 4 of the shells and coated them with some olive oil before baking. I thought this might help the cheese to melt. Well, the verdict is in. No melting, but fantastic flavor. 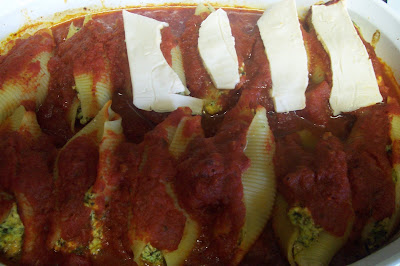 Out of the oven and onto the plate. These are even better the next day. Although the cheese does not melt it has a very creamy texture, which in a sense is kinda melty, but just holds its shape. Does that make sense? 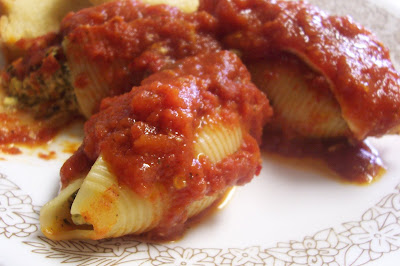 Wow, Galaxy seems to be sending a LOT of bloggers, sample packages!! How fun!!

Those stuffed shells look awesome! I was thinking last night (while I was trying to sleep) that I wanted to do a vegan stuffed shell special this week at the restaurant.. I have spinach I need to use up plus some sausage style seitan I made..

I really liked the cheese too..

Hi, Sheree! You kinda went Italian with all your new cheez products - it all looks wonderful!

I'm testing for Lindsey too!

Yay, I'm so glad you liked the shells! I guess I should have noted that my recipe makes A LOT of shells, eh? But the left overs are so good that I always make a giant batch!

I've had those mozzarella slices before. No melting without sticking them under the broiler, but they sure are convenient. Have fun testing all of your goodies!

I've never tried their vegan cheeses, maybe I should sometime! Thanks for the review, and lucky you to get it free in the mail...

I'm testing for HH too! I am soooo behind though since I've been busy and (currently) out of town. Hopefully I'll catch up soon!

we have the same taste in vegan cheese -- i love that galaxy stuff!

and your shells are making me so jealous. I cant find jumbo wheat shells ANYWHERE - how I crave stuffed shells!!! yours of course look amazing and comforting and so delicious. oh i want some so bad!

It is a splendid site.
I linked so that your site could visit it from my site.
Please link by all means with my site.
http://cookingrecipe001.blogspot.com/

Because I show various recipes, please visit the all of you.
http://cookingrecipe001.blogspot.com/

If a site and you that it is possible, and a big connection comes,
and it was watched comment by each other by linking have you visit it,
I am happy at all. And I pray for your good luck.

I DO LOVE THE PEPPER JACK!!! :) I've even thrown it on DH's sandwiches (cause I can't find his "regular" pepper jack slices anymore?) and if he's ever even noticed he hasn't mentioned it ;) THAT means it's good!

I need your pizza crust recipe!

Wow, aren't you lucky!
They don't put casein in their Rice line anymore? That is wonderful!

Wow look at all that cheese!

I could go for some of those stuffed shells right about now. =)

Hi Sheree!
What fun that you get to taste-test for Galaxy (and do some testing for Happy Herbivore--can't wait for those posts!).

Thanks so much for your comment on my blog--it is much appreciated! Glad it could lead me back here--you have some great recipes on the site and I LOVE your photography--it makes everything look completely tempting.

Hey those stuffed shells look yummy! If you want melty cheese you can always nuke the cheese in the microwave by itself and then spread it, already melted, on pizza, pasta, casseroles, whatever.

I tried some of that brand of cheez ages ago and frankly hated it - BUT I hated all faux foods back then so who knows! Since then I have forgotten (thankfully!!!!) what dairy tastes like and have moved on to vegan cheez which I now think of as the real thing! Go figure!!

But on to your WONDERFUL food - absolutely fantastic - and the shells delight me. Why don't mine ever look like that :(

Oooops. What I meant to express was that I would love to try that cheez again - and will! - now that I am over my hangup on giving up dairy and being a purist about the faux foods (is that clearer? I don't think so!). There are so many good substitutes out there - more coming all the time - that we have no reason to deprive ourselves :) Good for you for doing a whole 'Cheese Show' - nice theme!!!