We have found the breakfast food of champions. Susan's Mini tofu quiches. If you have not tried these I beg you too. I have disliked eggs most of my life. Even before I became vegan, eggs had to be smothered it cheese and salsa just to politely tolerate them. I read the reviews from Susan's post and knew I had to try them. When they were almost done cooking I touched the center to see if they were done and thought to myself, ewww they feel like eggs. I am happy to say they are fantastic and remember this is coming from someone who hates eggs. Now DH who loves eggs ate 3 of these right off the bat. He thinks they are great. Brandie made hers into a lil sandwich. Her version of a "vegan mc-muffin". They don't look as big as Susan's, but it might be the pan I used. Next time Brandie and I thought broccoli might be really good in them. I did add an extra 1/2 Tablespoon of yeast (we love nutritional yeast), but other than that I followed the recipe to a Tee. Thanks gain Susan for this masterpiece. I do know to double the recipe. These were gone lickety split. Everyone check out Susan's site. http://blog.fatfreevegan.com/2006/12/mini-crustless-tofu-quiches.html 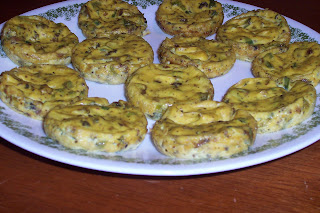 Yes, we are still eating falafel. Who can get enough of it. I made some sweet potato fries, which Brandie is now in love with, steamed green and red cabbage, broccoli, some yellow squash hiding behind the cucumber sticks, tomatoes, and another new kick, pickled beets. Let me tell you. We do not care for canned pickled beets. We don't like the taste or texture, but we found some jarred pickled beets that are free from preservatives and nasty stuff. They say they are like the German sweet and sour beets, although I have no idea if they are or not, they are great and are nothing like the canned varieties. 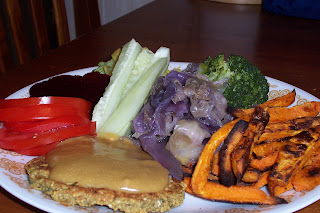 I just love quinoa! So I thought I would make a quick quinoa pilaf. Considering quinoa cooks in no time this is a very easy dish to make. I sauteed green onion, garlic, and shredded carrot in some No-Chicken broth. Once the veggies were getting soft I added a cup of quinoa and 2 cups of the broth. Put on the lid and let it simmer for about 15 minutes. Right before it was done I added some frozen green peas. Dinner also included Gardenburger "vegan" Chik-n patty with homemade guacamole on a sprouted wheat bun, cauliflower, green beans, and some broccoli. We are in love with avocados. My guacamole is so easy. I cut up an avocado and tomato. Mix them up really good. Then I add granulated garlic and salt and pepper to taste. It works as a fabulous spread on sandwiches and when DH wants a salad I puree it more and it is a wonderful dressing. 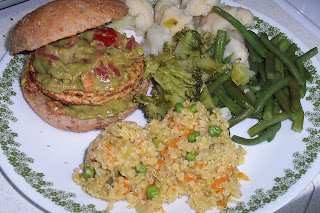 Tonight's dinner was very colorful. We had the leftover quinoa pilaf, pickled beets, yellow corn, "Eden's Baked Beans", yellow squash, zucchini, sliced tomatoes and some black olives. I think we did it! We got all the colors of the rainbow in this meal. I know, it looks like a strange combination, but healthy and tasty is big in our house. It just feels good to eat healthy. 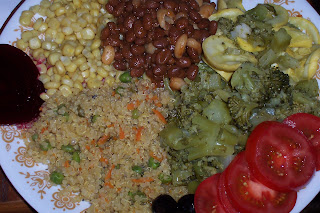 A quick strawberry shake for dessert. Fresh strawberries, soy delicious vanilla, and some Silk vanilla soy milk. What can get better? We found some organic baby cookies that are really good. Silly yes, but fun to be a kid! 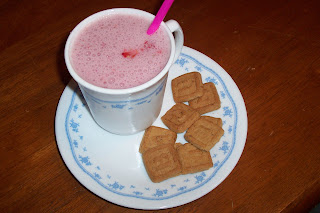 I need to make those quiches again. They were fabulous! I liked the batter. You don't even have to bake them - just have it as a dip!

Thank you so much for tip on susan's quiches! I'm like you with eggs -- don't like them, never have. As a child, I was alergic to them and never acquired a liking, even though I outgrew the reaction. I'll bravely try the quiches, though based on your recommendation. I Love the "silly" strawberrey shake!!! :o)

Hi tex, yes the batter is wonderful and strawberries are my favorite.

Vicki - You are so welcomed. I do hope you try the, They are so good!

what a gorgeous, healthy plate of food. You're right..who can get enough felafel? Not me.

Those quiches look delicious. I need to make them soon! I love beetroot from a jar! I’ve never seen it in the US, but that’s the way it’s most commonly eaten in the UK. I wonder if yours was similar? Everything looks so colourful and healthy!

Wow, what colourful, delicious looking foods. I haven't had falafel in a long time, but I do love it.

In your smoothie pic at the bottom the cookies look remarkably similar to the ones Susan (fatfree vegan) used for her banana pudding. Same?

Those quiches look wonderful, I will have to try them! And your rainbow-colored meal is making me crave veggies at 10am in the morning.....all that healthy goodness just makes me happy!

Scottish - I have only found these beets in a jar at Whole Foods, it just says "sweet and sour" pickled beets. They sure are good

Judy - yes, they are the same cookies. I found them about a month ago on the baby isle at Walmart. I love them.

vegan-noodle - I am glad that my yummies made you a happy vegan!

I am loving all of those different colors! This is a great blog. :)

Thanks for writing this.