Hi everyone, I am back. For some reason I had time to visit many of your blogs, post messages, and make new recipes, but ran out of time to update my own blog. Here I have a 3 day weekend and what do I do? Run out of time. I had all the intentions in the world to blog early today. Right! It is now 7:24pm and the clock is not going to stop ticking so I figured I better get something posted so people knew I was still alive. 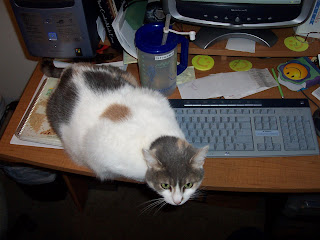 Now that I am going to try and get some typing done, my fur kid, Kelly decides to come and join in the fun. She always wants attention. Pet me momma, love me momma. What is a momma to do, but love her. I am so easily won over. Now if she will just move to the chair next to me I would be able to get a lot more done. She thinks my desk is her throne. Thank goodness, she is finally happy in the chair next to me. Back to food!
Disaster! 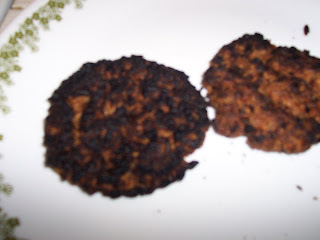 This is what happens when you try to visit your favorite blogs and ignor what you have under the broiler. I got so carried away reading everyone's wonderful recipes that I forgot about my "Breakfast Patties", which was to be part of tonights dinner. Well, at least one of them survived, but just barely Our daughter, BB, came home for dinner and I showed her the really burnt one. She tasted it and said, Yum carcinogen burgers! lol As you can see below at least the rest of dinner was a success. With some added green beans and avocado and tomato salad we could enjoy! 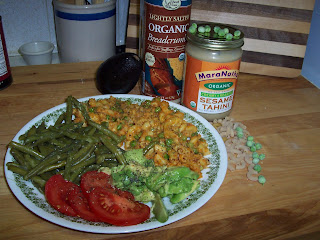 BB says plating is everything mom. Nicely done Brandie!
We had a modified version of Susan's Macaroni and "cheese". http://www.fatfreevegan.com/pasta/976.shtmlI Thank you Susan! 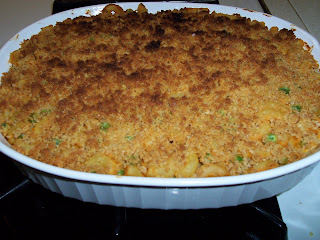 Here is my version of Susan's Baked Macaroni and "Cheese"
Original Recipe by Susan Voisin
2 cups uncooked macaroni
1 can great northern beans drained and rinsed
6 Tbsp. nutritional yeast
1/2 cup canned diced tomatoes
1 Tbsp. lemon juice
1/2 tsp. chili powder
1 tsp. onion powder
1 tsp. garlic powder
1 tsp. salt
1 tsp. yellow mustard
2 Tbsp. Roasted tahini
ground black pepper
1 cup frozen peas
2 Tbsp Earth Balance
6 Tbsp of dried bread crumbs
a shake or 2 of paprika
Preheat oven to 350.
Cook macaroni until almost tender. Drain, and pour into a large bowl. Combine the beans, yeast, tomatoes, lemon juice, garlic and onion powders, salt, mustard, and tahini in a food processor or blender. I let this blend quite a while in my food processor, you want it very creamy. Pour the sauce over the macaroni and add the peas. Mix until well combined. Pour into a greased casserole dish. I used an oval one about an inch and half deep or so.
In a small bowl mix together the melted Earth Balance, bread crumbs, and paprika. Sprinkle the bread crumb mixture over the macaroni and bake for 15-20 minutes. Then broil for about 5 min to make the topping get crusty.
For our family this makes 6 good size servings.
6 serving = 5 pts on Weight Watchers
8 serving = 4 pts on Weight Watchers
***********************************************************************************
I got this great book called, "The Great Amreican Detox Diet". I don't know if any of you saw the documentary Super Size Me, about the nutrition of McDonalds food. It is a very eye opening movie for any fast fooders. Anyway the book is written by Alex Jamieson, the wife of the man in the movie. She is a vegan chef and has some great recipes and a great web site. http://healthychefalex.com. These are her Breakfast Patties. They have brown rice flour, oats, onion, sage, thyme, nuts, brown rice, mushrooms, broth and tamari in them. They are really good! My girlfriend says they taste like Thanksgiving because of the sage and thyme. My honey and I like them on bread with mustard and mayo. She suggests freezing them individually, which I have done and they warm up nicely under the broiler. 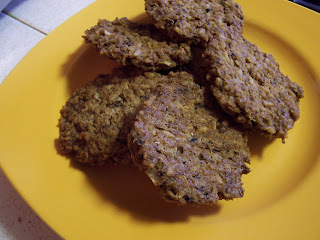 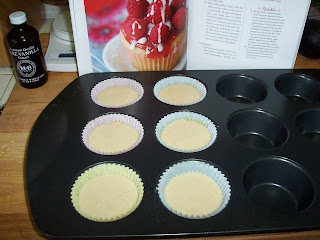 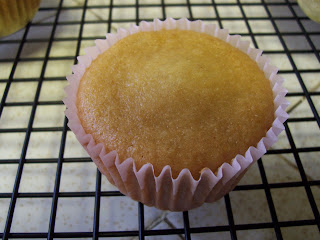 The recipe said to frost the cupcakes use your choice of fruit spread and then a small amount of the icing, topped with your fruit. In the book they have these wonderful little teasures frosted with raspberries and white icing. At the Farmers Market on Friday I bought some killer strawberries and figured I would use them on my cupcakes. Of course, once I am making them I realize I have no strawberry jam, spread, preserves, anything strawberry. But wait, I do have blueberry and fig. Some how fig just didn't sound like a good mix with strawberries so blueberry it is. I also added some vanilla to the icing, which turned it an off white color. So as far as "Sexy" cupcakes, I don't think mine are very sexy, but they sure do taste good! 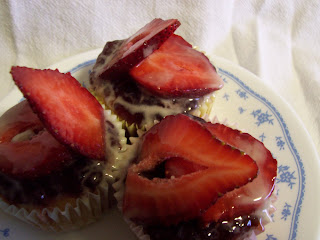 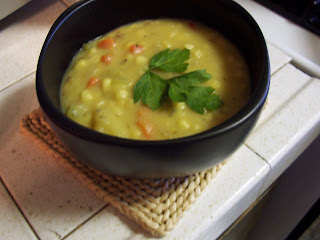 Today was really cold! I am sure that for many of you this is mild weather, but here in Southern California 40 degrees in the day time is really cold. Last night it got down to the low 20's. We had water pipes breaking, crops freezing, and gas and eletric bill rising. I enjoy the cold weather. I love Montana in the winter. We were there a couple years ago in the dead of winter and I love it. I don't particularly like San Diego, but I doubt there will be any moving for us. Back to yummy, warm soup. I got out one of my e\Ebay finds,"Table for Two" by Joanne Stepaniak. Corn & Potato Chowder is just what the doctor ordered. It is a basic chowder of potatoes, red bell pepper, carrots, onion, celery, and veggie broth or water ( I used "No Chicken Broth) my daughter is in love with the stuff. To get the creamy texture you puree half of the potatoes and add a small amount of soy milk. I added a cup of corn to the soup when it was done for some more texture. I think it is was rather bland, but with some added curry, salt, and pepper it turned out pretty good. My sweet Yogi liked it and I liked it. Our daughter did not like it. I used Silk plain soy, which is sweetend, so it didn't have that savory quality we were looking for. I will use unsweetened soy milk next time I make it. Her recipe says it makes about 1 1/2 quarts. Mine only made 3 1/2 cups. Weird... since I followed the recipe to a tea. Even making only 3 cups mine came out to 4 points per cup on weight watchers.
********************************************************************************** 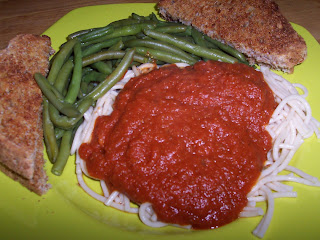 We were due for spaghetti or lasagna. Spaghetti won out. I have used the same recipe for the past 26 years. I found the main recipe in an old Mennonite cookbook and have adapted it to our tastes and use lentils in place of meat. Along with the spaghetti we had steamed green beans and garlic toast, of course! This sauce is only 2 points per cup on Weight watchers.
Sheree's Spaghetti Sauce
In a large skillet saute' the following ingredients:
1 T. olive oil ( I cut this down and saute' in veggie broth)
4 cloves of garlic, minced
1/2 green bell pepper, chopped
1 medium onion, chopped
1 cup of cooked lentils
Once the veggies are begining to brown add in:
2 cups of tomato sauce
3/4 cup of tomato paste
1 Tbls of vegan worcestershire sauce
1 cup of veggie broth
1/4 tsp of oregano, basil, thyme, and cumin.
salt and pepper to taste
Let simmer for about 45 min so the flavors can meld. The longer it simmers the yummier it gets. I use my hand blender to puree most of the lentils into the sauce. This freezes well and is easily doubled.
************************************************************************* 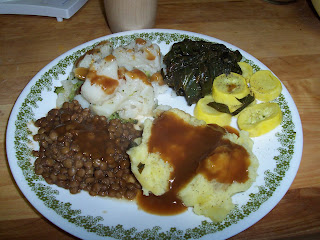 I was in the mood for some collard greens. Of course my mom makes them the southern way with lots of bacon fat. (Gross) I have never eaten them that way and I am happy for that. I found this recipe on http://Bestnaturalfoods.com in his old newsletters. I think I next time I will cut back on the amount of vinegar. It really over powers all the other flavors. I ate it, but next time I will make some changes. Along with the collard greens we had lentils, steamed cauliflower and yellow squash, potatoes, and brown vegan gravy. My daughter asked me if I put butter in the potatoes cause they were so yellow. No, just good old Yukon Golds. Love them!

wow! look at all that gorgeous food!

we have kitchen disasters sometimes :)

Wow, you really have been doing a lot of cooking. Glad to hear you liked the macaroni and cheese; your version looks wonderful. And your fur-kid is adorable!

Michelle -
Thank you for your kind words and the visit. It makes blogs fun when you have visitors.

Susan -
Yes, we do love the mac and cheese and enjoy your ideas and web site. Thank you in behalf of "kelly" my fur kid!

And the green plate -- my family had those plates when I was growing up. They bring back memories :)