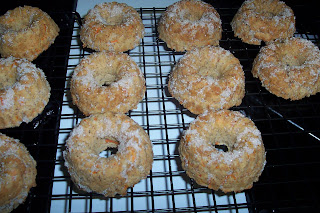 If any of you have not stopped by Stephanie's blog you really should. She is an inspiration to other teens by trying to live a well-balanced healthy Vegan life and writing a cookbook too. Here is her link. http://summerloco.blogspot.com/
A week ago or so she asked if anyone would like to test her recipes. I once again jumped at the chance. I love to test recipes. Today I tested her donut recipe. Remember I said she is living a healthy life and these donuts are just that. Baked not fried and gluten free. In her recipe she gives both the sugar version or powdered stevia version. I used liquid Kal Stevia and probably should have used more than I did. Mine turned out not as sweet as the family would think donuts should be. They are similar to a cake donut and not the puffy ones that many are used to. I mixed together a couple tablespoons of sugar and some cinnamon and dipped them when they came out of the oven. DD would like more cinnamon. She adores the stuff. I also did not have a donut pan, which DH tried to find and buy me so I used a mini-bundt pan and they turned out cute. Overall I think these are going to be a great addition to her ever growing list of recipes for her cookbook. Keep up the good work Stephanie. 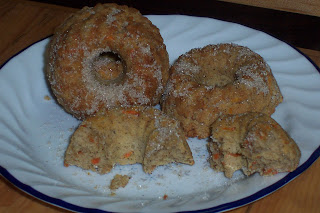 Donut cookies? Ohmygosh, i think i love these! I'd be doing the cinnamon thing as well. I've stopped by Steph's blog and enjoy it. What an inspiration she is, giving me great hope for our future generations!

I will definitely check her blog out.. what a wonderul example she is for so many!

I can't believe she's writing a cookbook and she's only 14! From reading her posts, she's had some issues with food that she seems to have conquered.

Those look awesome! I'll be sure and check out her blog.

Oh my family would really love those! I think they feel awfully deprived of something’s.. Doughnuts are one!

Those look incredible! Hmmm, maybe I should get in on this whole recipe tasting thing...