Well, I am alive, but it has been a rough week. I had a back injury in June of 06, which has been giving me grief. I have not been able to sit long and do the posting. I have just not been able to get it together. Then tonight the family requested Tofu Fish Sticks. They are awesome! I posted about them a bit ago. Anyway, got everything ready and began to cook. When I reached into the fridge and to get the main ingredient realized I only had Med Firm Tofu. Well, surely that will work. No big deal. RIGHT!, lets just say "NOPE" good things did not come of it. They just fell apart into mush. Thank God for Gardenburger's Vegan Chik'n Patties. So that is my week so far. I figure only good things can come of from now on. Ok, enough complaining. Even though I have not posted I have been cooking and taking pictures . So enjoy the picture show. hehehe

Here are Bryanna's Vegan Cheesecake Swirl Fudge Brownies from one of her newletters. http://www.bryannaclarkgrogan.com
They look so pretty here. They just came out of the oven and are cooling. I omited the orange zest because DH does not like orange and chocolate mixed and added 1 extra Tablespoon of sugar to the cream "cheeze" topping. DH likes things a bit sweeter. 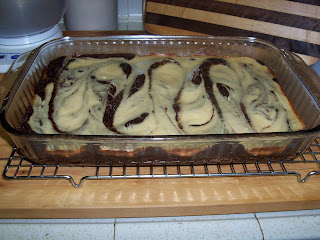 I greased the pan real GOOD with Earth balance just like Bryanna said, yet when these sweet little yummies were cooled they refused to come out of the pan. Thus you get this! You might say ugly, but let me tell you. You can also say delicious! Next time I will maybe flour the pan too, or use Pam instead of Earth Balance. 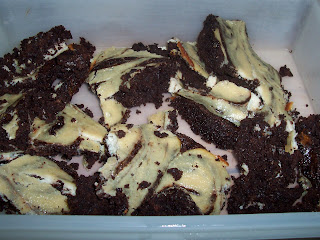 Here is my Creamy Potato Leek Casserole, which I got from Dreeena's book, The Everyday Vegan. BB, my DD, liked them as did I, but mine turned out a bit dry. We easily remedied this by putting a tiny bit of Earth Balance on them when we ate them. I made 2 smaller dishes instead of one large one. 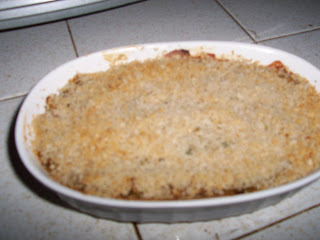 I usually make Magic Meat Loaf from Jen's website,http://www.veganlunchbox.com/loaf_studio.html but I was going through Bryanna's newsletter and decided to try her recipe. Here is a picture of it before it is cooked. I did cut the recipe in half and it still made 2 small loaves. 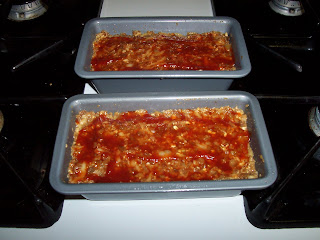 Just came out of the oven! I was trying to get the top a little crunchy and it worked. Oh, I put ketchup on the top before baking and it gave it a nice flavor. 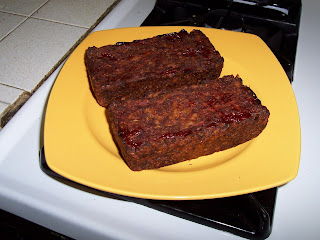 Here is dinner before gravy. You can see the Potato Leek Casserole, cauliflower, corn, "meet"loaf, and yellow squash. As you can see we are out of green veggies. It is definatly time to shop. 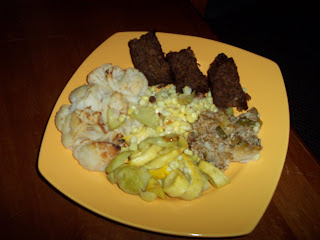 With gravy and a green salad to brighten things up. 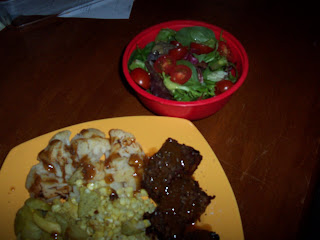 It has been a Bryanna week. I love her tofu scramble seasoning. It is the best around, but that is my opinion and I have not tried any others. yet. I am open minded. lol.. I learned how to make supremes from citrus fruits by watching the show, "Iron Chef American" on the food network channel. I just love how easy it is especially when eating grapefruits. I eat a grapefruit every morning and there is just no mess. You cut off both ends and then cut away the peel exposing just the flesh of the fruit. Then you cut down just inside the membranes that divide the fruit and there you have it a cute little fruit segment. No fuss, just yummy little supremes. Oh, and I really only like those Texas red grapefruit. They are like eating candy! 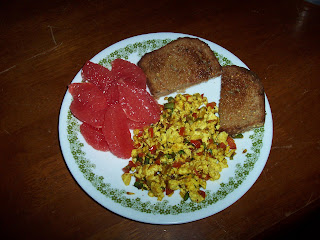 Last but not least here are some Apple Granola Muffins thanks to Alex Jamieson, Author of "The Great American Detox Diet". I emailed her and asked if I could post her recipe and on my blog. She was very kind and said share away. If you haven't read her book it is very easy reading packed with tons of information and great recipes.

Preheat oven to 350. Grease a 12 cup muffin pan with extra virgin olive oil or spray
Sift the flours, baking powder, cinnamon, and salt together in a large mixing bowl. Stir to mix well.
In a medium mixing bowl, whisk together the soy milk or apple juice, sugar, oil, and vanilla.

Make a well in the center of the dry ingredients and pour the wet ingredients into it. Use a large spoon or rubber spatula to combine the ingredients. Stir and fold rather than beating: do not over mix. The batter should be lumpy, not smooth.

Carefully fold in the apples and walnuts.

Spoon the batter into the muffin tin, filling each cup about two-thirds full.

Sprinkle the oats on top of the muffins.

Bake for 20-30 minutes, or until the muffins are nicely browned and a toothpick inserted into the center of one of them comes out clean.

Remove from the oven and allow the muffins to rest in the tin for 5 minutes before removing them.

I have used regular spelt flour and they come out great. I have also substituted almond extract for vanilla.
I usually cut the recipe in half, which makes 6 regular muffins or 18 mini muffins. Minis are always fun. I cook the mini’s for about 12-15 min. 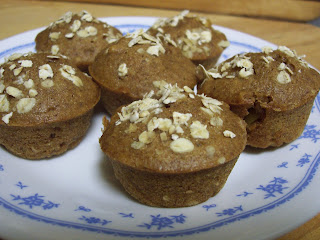 i copied down that recipe for the apple granola muffins.. sounds like something the kids (and me!) would love :)

sorry to hear that your back is bothering you. my back hurts sometimes too, but that's because i pushed out a 9 lb, 3 oz posterior kid named Kaeden ;) my back hasn't been quite the same since!

I'm a great big Bryanna fan also. I can tell you have been enjoying time in the kitchen and on blogger. Inspiring... i'm hungry! Any luck with the pasta (eggroll) wraps?

Hey there.. I should have put a link to your page and gave you credit for the lentil ball sub idea.. I knew I read it somewhere.. sorry about that.
That "meat"loaf dinner looks like quite the production! looks great!
Which newsletter was that recipe in?

Michelle - I am glad you are going to try the muffin recipe. They are so moist and delicious.

Made in Alaska - No worries about the credit for the sub idea, but thank you for thinking of me. I made a mistake. The "meatloaf" recipe was on Bryanna's Sunday, January 07, 2007 blog. Here is the link: http://veganfeastkitchen.blogspot.com/

Hi Dori - No luck on the wraps. I did not make it out to the area of town that has the oriental stores. My DH went, but I didn't want to put that task on him. Besides I love to look and read labels. lol

Those desserts look scrumptions! I just realized that I don't have a link to your page, and I'm about to change that.

Those meatloaves and muffins look awesome! I didn't have much luck with the Magic Loaf, so I haven't made one since. But I've been craving meatloaf so it's nice to see that yours turned out great.

Regarding the brownies, try lining the pan with aluminum foil and grease that and then pour the batter in. This is a trick I learned from Karina aka the Gluten Free Goddess. With the foil, you can just pull out the entire sheet of brownies. Yumm!