It is time again for another Daring Baker's Challenge Post!
The February Challenge comes to you from Wendy at wmpesblog (Arizona) and Dharm at Dad - Baker and Chef (Malaysia). 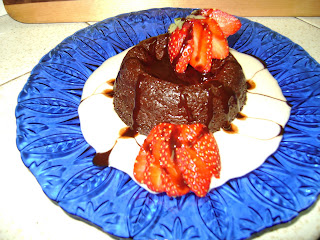 As you can see from my photo you can see I failed to turn off the flash before taking the picture, but there were not second chances due to the devouring of the cake. :o) This cake is a flourless cake, yes you heard me right, flourless. I veganized the original recipe in hopes that is would work and it did!!! The ice cream is another story, but hey everything still tasted good.

16oz of vegan chocolate chips. (I used half chocolate and half carob)
1/2 cup of Earth Balance
5 Tablespoons of flaxseed meal
1 1/4 cup of water
2 Tablespoons plus 1 1/2 teaspoons of Ener-G Egg Replacer
3/4 cup plus 1 Tablespoon of warm water

In a small bowl mix together the flaxseed meal and 1 1/4 cup of water so that it has time to get all gooey.

Blend the chocolate mixture and flaxseed mixture together. It will be almost rubbery as you do this, but keep mixing.

Beat your Egg Replacer and warm water together until you achieve stiff peaks. Once you do gentle fold 1/3 of this into your chocolate mixture and repeat until all is gently folded in.

Prepare your pan with oil and parchment paper if you choose. I baked mine in a large muffin tin and did not use parchment paper, but believe I will next time. They were a little frustrating to get out of the pan. I baked mine at 375 for about 40 minutes. The original recipe calls to bake the cake for 25 minutes and that it will be similar to a brownie look with an internal temperature of 140. I checked after 25 minute and the internal temperature was 140, but they were still goop so I continued baking until the toothpick came out clean. Cool on a cake rack for about 10 minutes before removing from the pan.

DH love these. He said he wished they were a bit sweeter, but it was because I used half unsweetened carob chips. A girl has to use what is on had with today's economy. All and all they were a great success.

Now for the ice cream part. I don't own an ice cream maker and as you can see I had little success making it without one. I have to tell you that I used the new Mimic Creme as my base along with sugar and vanilla and the flavor was right one. Therefore my little chocolate lovers are bathing in a beautiful, flavorful melted ice cream. :o)

Mmmm. Even with the melted ice cream that looks absolutely fantastic.

Looks good - I don't suppose there's any left for me to taste? lol...

I would really want to try these vegan concoctions! They sound divine!

It is gorgeous! I love the recipe, and who cares if the ice cream is melted. Outstanding!

I will have to share the recipe with my vegan friends. Sounds wonderful. Great job!

This looks beyond yummy! Can't wait to try to make it!
Cindy
http://vegetarianmamma.blogspot.com

Great job on this challenge- Your recipe sounds decadent and delicious!

Looks like yours turned out soooo much better than mine! Mine had tofu in it and just stayed mushy. Bummer about the ice cream. I think next time I would use half mimicreme and half something else.
Looks great!

Amazing that you could veganize this recipe!! Looks delicious.

Love the fact that our recipes don't require the eggs- especially when the original asks for FIVE! ;)

Great job, impressive veganization. Plus, you can't go wrong with chocolate and strawberries.

I can definitely see why you think it's the best decision you've ever made: look at how gorgeous that vegan cake is! Vegans deprived? Your cake begs to differ!

The cake looks wonderful! I've made sorbet with coconut milk instead of dairy, or would that be ice cream? ...it was pretty good.

I'd slurp up your ice cream!

looks really fabulous. Once in a while super chocolate goodness is needed :)